You asked, “If you are so sure Trump is going to make a credible play for the election, how can he be defeated?” Here’s my answer. You may not like it. Before I’m done, I’m gonna call you part of a mob and tell you to stop being so damned rational and smug and immune to the Truth of the Trump. And I’m gonna tell you I think he still might win.

Here’s why: No rational attempt to defeat the Trumposaur has done anything but propel him. You think being rational will save the republic, but it only feeds the beast. 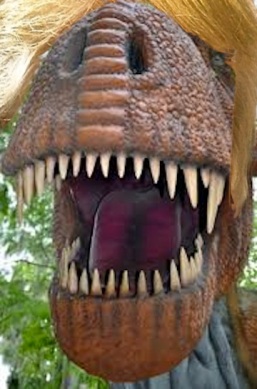 That’s because the Trumposaur has primitive magic. He turns citizens into swine, the populace into a mob. But that’s the level, the primitive level of the unconscious, where we have to fight the beast. Instead of just turning up our noses at the stink he creates, we need to look at the dogpiles he has exposed and clean up our messes

Yesterday, President Obama, Clinton, The Washington Post and much of the media ganged up on Trump because of his new outrageous statements about assault rifles and Obama’s stance – or non-stance – against Islamic terrorists at home and abroad after the attack on the Orlando LGBT nightclub. Today, the bloviators on CNN are back at it again, quoting poll after poll and spinning scenarios showing why Trump can’t, won’t, isn’t going to win, repeating every mistake they made during his march on the Republican nomination. I don’t know how his numbers will do, but I’m still not betting against him. Everyone who has until now has lost. And the other routes to fighting him in his own jungle are quickly closing down.

They could have starved his monstrous narcissism. That would require CNN and Fox and even PBS and all other media obsessed and addicted to him to ignore Trump, take the needle out of their arms, turn the cameras off him and cure their addiction to the ratings his name produced for them. Ain’t gonna happen.

We might have hoped the Republican party had the wit and courage to turn away Trump’s assault through its own arcane nomination procedures. As Lindsay Graham said early in this election cycle, “The Republican party may have to lose an election to save the Republic.” And by some miracle, it still may happen in July as some pathetic folks in the press are hoping out loud, but Do you want to leave the fate of the nation to the wisdom and courage of a political party?

We can hope the nine-year-old self-absorbed bullying boy-man who drives the Trump psyche realizes he never wanted to be president anyway because it’s too damned hard, and he’ll go home to steal more cookies and kick the cat, but his megalomania is being pleasured too much for that to happen. Maybe we could have turned the tide a few months ago. It’s too late now.

We might have hoped the Trumposaur would be exposed by the broadcast media more convincingly than he already has been, but I don’t see how. They’re trying awfully hard with little success at finding the line between coverage that exposes him and coverage that only gives him more exposure and gets him more votes. Every stab at really wounding him – especially and merely just by quoting his outrageous broadsides, inanities, and lies –  just makes him bigger. The New York Times and CNN and Fox and The Washington Post and the more stately newspapers and news channels that disapprove of Trump in attempt to quell his rising force has so far demonstrably, empirically had the opposite effect. His voter base has kept growing.

And the reason is simple: inside all his crazy salvos are kernels of truth. Here are a few.

Yes, Obama and his Secretaries of States Clinton and Kerry have betrayed US allies, diminished US standing in the world, monumentally failed in the Mideast, lied in order to push through an incredibly bad Iran deal, and let Russia grow aggressive without opposition. They have made the world worse by their weakness.

Yes, health care in America is broken and Obamacare made it worse, not better.

Yes, the fight against Muslim terrorists is easier if you name the enemy. Nazis would have been harder to defeat if we didn’t call them Nazis. And yes, most of Islam is inimicably opposed to Western culture.

Yes, letting our borders remain porous does make us less safe.  Yes, turning a blind eye to illegal immigration tears down respect for law and is expensive.

Yes, blacks in America have done no better, and maybe worse, under Obama.

Yes, The Washington Post lied when its first headline bleated that Trump accused Obama for the slaughter in Orlando, and then showed its cowardice when it scurried to hide behind freedom of the press.

Yes, in his speech after Orlando, Obama reserved more anger and outrage for Trump than for the Muslim terrorist who slaughtered those folks.

The secret of the mob 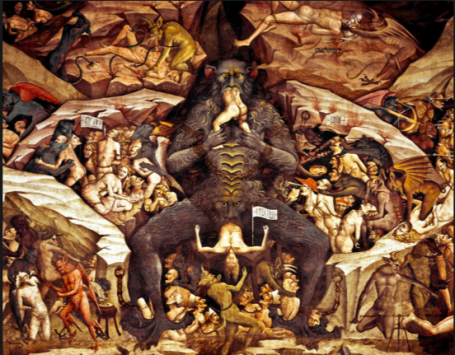 Here’s the secret of a mob: when we contemplate it, it’s always made up of others. But the fact is, at the very moment we deny we could ever be part of one, we are all candidates for the mob. Point to a roomful of people and single out exactly who belongs. Are you sure membership in the mob is reserved for THEM – the uneducated, unwashed, hillbilly, redneck, naïve, young, Southern, Western, Midwestern, Rust Belt, urban, working class, unemployed, union members, seniors, veterans, working poor, rural, Texans, racists, sexists, soccer moms, angry white men, Republicans, disenfranchised, longshoremen, beer drinkers, churchgoers, gun-toters? Are you too educated, refined, knowing, and civilized to be part of the mob?  Then how about the PhDs, lawyers, teachers, doctors, billionaires, stockbrokers, self-made businessmen, programmers, women and men I know who say they will vote for him? How about the real estate brokers, Rotarians, Elks, Chamber of Commerce types, believers in God, atheists, and quiet neighbors I know who will vote for him? How about the Buddhists, Jews, Christians, and Hindis I’ve heard pledge their loyalty?  The baseball, basketball, hockey and football fans? The Uber drivers and Uber passengers?

We all carry a lizard brain around in us. It’s back in there, waiting to emerge. Yes, we spend a lot of time filtering it, caging it, burying it, forgetting it. But it’s there.  Why else do democracies persistently vote themselves into tyrannies? Why do mobs form? Against all reason. Acknowledging the lizard within us is the secret to defeating the Trumposaur.

To do this, we need to dig deep, introspectively, to feel the draw of The Trumposaur, the pull of his authoritarianism, his promise of dark redemption. We need to admit the extent to which his lies hide truths, and find the middle between our team and his. We need to tune in to and commune with the lizard brain inside us. We need to feel the logic of his allure beyond logic and stop being so freaking civilized. We need to admit, before it’s too late, that The Trumposaurus Rex is an ultimate disruptor because he simultaneously exposes the truth and breaks all the rules of the game.

History, and Trump’s march, prove that elitist judgments and the decorous belief we’re above the fray are no match for a tyrannical bully, a Trumposaurus Rex. We have to join the fray by admitting we are the fray.

How many times do we have to see the film? Don’t think Trump’s Jewish grandson will protect Jews, any more than all the Jewish philosophers and scientists and Jewish good Germans saved themselves.  Once you unleash the lizards, no one is safe.

Stephen Berk, Professor of History at Union College, has shown that throughout the Diaspora, with the precision of a machine, every four generations after Jews immigrate to a country they are slaughtered or expelled or both. That usually means an enlightened, tolerant government has failed. By my count, Jews are in the Fourth Generation in America.

I’d say cheers as I usually do, S., but let us leave the cheers for the mob.

2 thoughts on “Trumposaurus Rex, Act 3: How to Defeat the Beast”